Al-Nawawi (may Allaah have mercy on him) mentioned that the scholars were agreed that it is mustahabb to take a bath before the 3Eid prayer.

One should not come out to the prayer-place on 3Eid al-Fitr before eating some dates, because of the hadeeth narrated by al-Bukhaaree from Anas ibn Maalik who said: “The Messenger of Allaah salallaahu 3Alayhi wa sallam would not go out on the morning of 3Eid al-Fitr until he had eaten some dates… and he would eat an odd number.” (2)

It is mustahabb to eat before coming out because this confirms that we are not allowed to fast on this day, and demonstrates that the fast is now over. Ibn Hajar (may Allaah have mercy on him) explained that this is to prevent people extending the fast and it also means obeying the commandment of Allaah. (3)

Whoever does not have any dates may break his fast with anything that is permissible.

But on 3Eed al-Adhaa it is mustahabb not to eat anything until one comes back from the prayer, so he should eat from the udhiyah if he has offered a sacrifice. If he is not going to offer a sacrifice there is nothing wrong with eating before the prayer.  (4)

Takbeer on the day of 3Eid

This is one of the greatest sunnah of this day, because of the words of Allaah (interpretation of the meaning):

“…(He [Allaah] wants that you) must complete the same number (of days), and that you must magnify Allaah (say Takbeer – ‘Allaahu akbar’) for having guided you so that you may be grateful to Him.” [soorah Al-Baqarah, v:185]

Al-Waleed ibn Muslim said: “I asked Awzaa’i and Maalik ibn Anas about saying Takbeer aloud on 3Eid. They said, ‘Yes, 3Abd-Allaah ibn 3Umar used to say it aloud on the day of Fitr until the imaam came out.'”

Saying takbeer when coming out of one’s house to the prayer place and until the imam came out was something that was well known among the salaf (early generations). This has been narrated by a number of scholars such as Ibn Abi Shaybah, 3Abd a l-Razzaaq and al-Firyaabi in Ahkaam al-3Eidayn from a group of the salaf.

Ibn Shihaab al-Zuhri (may Allaah have mercy on him) used to say, “The people used to recite takbeer from the time they came out of their houses until the imam came in.”

The time for takbeer on 3Eed al-Fitr starts from the night before 3Eed until the Imaam enters to lead the 3Eed prayer.

In the case of 3Eed al-Adhaa, the takbeer begins on the first day of Dhu’l-Hijjah and lasts until sunset on the last of the days of tashreeq.

The wording of the Takbeer

Ibn Abi Shaybah reported in al-Musannaf that Ibn Mas3ood (may Allaah be pleased with him) used to say Takbeer on the days of Tashreeq as follows:

Ibn Abi Shaybah reported it elsewhere with the same isnaad, but with the phrase “Allaahu akbar” repeated three times. 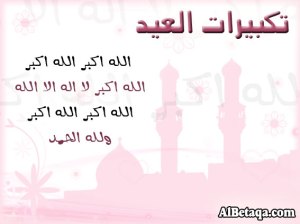 People may exchange congratulations and good greetings on Eid, no matter what form the words take. For example they may say to one another, “Taqabbal Allaahu minnaa wa minkum” (May Allaah accept [the fast and worship] from us and from you” or “3Eed mubarak” and other similar permissible greetings.

Jubayr ibn Nufayr said: “At the time of the Prophet sallAllaahu 3Alayhi wa sallam, when people met one another on the day of 3Eed, they would say, ‘Taqabbal Allaahu minnaa wa minka (May Allaah accept from us and from you).'” (7) 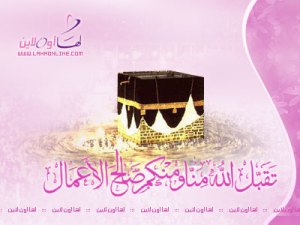 The practice of exchanging greetings was well-known at the time of the Sahaabah and scholars such as Imaam Ahmad and others allowed it. There are reports which indicate that it is permissible to congratulate people on special occasions. The Sahaabah used to congratulate one another when something good happened, such as when Allaah accepted a person’s repentance and so on.

There is no doubt that congratulating others in this way is one of the noblest kinds of good manners and one of the highest social qualities among Muslims.

The least (that may be said concerning the subject of congratulations) is that you should return the greetings of those who congratulate you on 3Eed, and keep quiet if others keep quiet, as Imaam Ahmad (may Allaah have mercy on him) said: If anyone congratulates you, then respond, otherwise do not initiate it. (8)

Jaabir radi Allaahu 3Anhu said: “The Prophet sallAllaahu 3Alayhi wa sallam had a jubbah that he would wear on 3Eed and on Fridays.” (9)

Al-Bayhaqi reported that Ibn 3Umar used to wear his best clothes on 3Eed, so men should wear the best clothes they have when they go out for 3Eed.

Women, on the other hand, should avoid adornment when they go out for 3Eed, because they are prohibited from showing their adornment in front of non-mahrem men. A woman who wants to go out is forbidden to wear perfume or to show off in a tempting way in front of men, because she is only going out for the purpose of worship.

Do you think that it is right for a believing woman to disobey the One Whom she is going out to worship and go against His commands by wearing attention-grabbing tight and brightly coloured clothes or by putting on perfume and so on?

Ruling on listening to the 3Eid khutbah

(The 3Eid khutbah) differs from the Friday khutbahs in four ways … the fourth of which is:

that it is sunnah and it is not obligatory to listen to it, because it was reported that 3Abd-Allaah ibn al-Saa’ib said: “I attended 3Eid with the Messenger of Allaah sallallaahu 3Alayhi wa sallam, and when he had finished the prayer, he said: “We are going to give a khutbah, so whoever wishes to sit (and listen) to the khutbah, let him sit down, and whoever wants to leave, let him go.'”

Al-Nawawi (may Allaah have mercy on him) said: “It is mustahabb for people to listen to the khutbah, although the khutbah and listening to it are not essential conditions of the 3Eid prayer. (10)

But al-Shaafa3i said: ‘If someone does not listen to the khutbah of 3Eid, at the time of an eclipse, when prayers for rain are offered, or during Hajj, or he speaks during one of these khutbahs, or leaves, I would not like this, but he does not have to repeat the prayer.”

Nevertheless, if talking disturbs those who are listening, it is haraam to talk because of this disturbance, not because of not listening. On this basis, if a person has a book with him during the imam’s Eid khutbah, it is permissible for him to read it, because this does not disturb anyone. But according to the madhhab followed by this author, it is obligatory to listen to the khutbah if one is present.

Jaabir ibn 3Abd-Allaah (may Allaah be pleased with him) reported that the Prophet sallAllaahu 3Alayhi wa sallam used to vary his routes on the day of 3Eid. (11)

It was also reported that the Prophet sallAllaahu 3Alayhi wa sallam used to go out walking, and he prayed without any adhaan or iqaamah, then he would come back walking by a different route.

It was said that this was so that the two different routes would testify in his favour on the Day of Resurrection, because on that Day the earth will speak about everything that was done on it, good and evil.

It was also said that this was done in order to demonstrate the symbols and rituals of Islaam along both routes; to pronounce the remembrance of Allaah; to annoy the hypocrites and Jews and to scare them by the number of people who were with him; to meet the people’s needs by giving fatwas, teaching them and setting an example for them to follow; to give charity to those in need; or to visit his relatives and uphold the ties of kinship.

Fasting and Prescribed deeds on the Day of 3Arafah