Virtues of the Day of 3Arafah

1. It is the day on which the religion was perfected and Allaah’s Favour was completed.

It was reported from 3Umar ibn al-Khattaab (may Allaah be pleased with him) that a Jewish man said to him, “O Ameer al-Mu’mineen, there is an aayah in your Book which you recite; if it had come to us Jews, we would have taken that day as an 3Eed (festival).” 3Umar said, “Which aayah?” He said: (interpretation of the meaning) “This day I have perfected your religion for you, completed My favour upon you, and have chosen for you Islam as your religion.” [soorah Al-Maa’idah, v:3]

3Umar said, “We know on which day and in which place that was revealed to the Prophet sallAllaahu 3alayhi wa sallam. It was when he was standing in 3Arafah on a Friday.” (1)

The Prophet sallAllaahu 3alayhi wa sallam said: “Yawm 3Arafah (the day of 3Arafah), Yawm al-Nahr (the Day of Sacrifice) and Ayyaam al-Tashreeq (the 3 days following Yawm al-Nahr) are 3Eid (festival) for us, the people of Islaam. These are days of eating and drinking.” (2)

It was reported that 3‘Umar ibn al-Khattaab said: “It ( i.e., the aayah ‘This day I have perfected…’) was revealed on a Friday, the Day of 3Arafah, both of which – praise be to Allaah – are 3Eids for us.”

The Almighty cannot swear by anything except that which is mighty. Yawm 3Arafah is the “witnessed day” mentioned in the aayah (interpretation of the meaning):

“By the witnessing day [Friday] and by the witnessed day [the Day of 3Arafah].” [soorah Al-Burooj, v:3].

It is the “odd” [i.e., odd-numbered, Witr] by which Allaah swore in the aayah (interpretation of the meaning): “And by the even and the odd” [soorah Al-Fajr, v:3].

4.  Fasting on this day is an expiation for two years.

It was reported from Abu Qataadah (may Allaah be pleased with him) that the Messenger of Allaah sallAllaahu 3alayhi wa sallam was asked about fasting on the Day of 3Arafah. He said, “It expiates for the sins of the previous year and of the coming year.” (4) 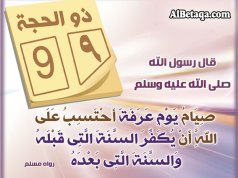 This (fasting) is mustahabb for those who are not on Hajj. In the case of the one who is on Hajj, it is not Sunnah for him to fast on the Day of 3Arafah, because the Prophet sallAllaahu 3alayhi wa sallam did not fast on this day in 3Arafah.

It was narrated that he forbade fasting on the Day of 3Arafah in 3Arafah.

5.  It is the day on which Allaah took the covenant from the progeny of Aadam.

It was reported that Ibn 3Abbaas (may Allaah be pleased with him) said: the Messenger of Allaah sallAllaahu 3alayhi wa sallam said: “Allaah took the covenant from the loins of Aadam in Na’maan, i.e., 3Arafah. He brought forth from his loins all his offspring and spread them before Him, then He addressed them, and said: ‘Am I not your Lord? They said, ‘Yes, we testify,’ let you should say on the Day of Resurrection: ‘Verily, we have been unaware of this.’ Or lest you should say: ‘It was only our fathers aforetime who took others as partners in worship along with Allaah, and we were (merely their) descendents after them; will You then destroy us because of the deeds of men who practised Al-Baatil (i.e., ploytheism and committing crimes and sins, invoking and worshipping others besides Allaah)?’ [soorah Al-A3raaf, v:172-173].” (5)

6.  It is the day of forgiveness of sins, freedom from the Fire and pride in the people who are there:

It was narrated from 3Aa’ishah (may Allaah be pleased with her) that the Prophet sallAllaahu 3alayhi wa sallam said:“There is no day on which Allaah frees more people from the Fire than the Day of  3Arafah. He comes close and expresses His pride to the angels, saying, ‘What do these people want?’” (6) 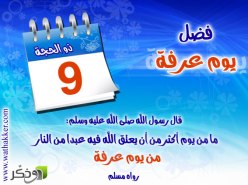 It was reported from Ibn 3Umar that the Prophet sallAllaahu 3alayhi wa sallam said: “Allaah expresses His pride to His angels at the time of 3Ishaa’ on the Day of 3Arafah, about the people of 3Arafah. He says, ‘Look at My slaves who have come unkempt and dusty.’” (7)

“As for you staying till the evening in 3Arafah, then Allaah descends to the sky of the Duniya and He boasts about you to the Angels, and says: ‘My slaves have come to Me, looking rough, from every deep valley hoping for My mercy, so if your sins were equivalent to the amount of sand or the drops of rain or like the foam on the sea I will forgive them. So go forth My slaves! Having forgiveness and for what or who you have interceded for.’” (8)

Some Rulings on Udhiyah [Sacrifice]

Fasting and Prescribed deeds on the Day of 3Arafah